ROMA LIVES ON. For those who care for a second half of my much delayed adventures. The best part of our escapades through Rome, in my opinion, was the last evening we spent together, which we were able to have because we stayed at an airbnb, home that formed a community. Michael, Sabina, and I decided, after our absolutely insane day walking through the Vatican, that we all needed to shower, try to work the Vinyl player, and then decided, OH, WHY NOT WALK TO THE COLISEUM AFTER WE ALREADY WALKED 22.5 KM TODAY. And then Google saved us by telling us it was already closed, fifteen minutes prior. So what did we decide to do? We decided to run, at 7:44 pm to the grocery store that would close at 8 pm to buy food and cook it for ourselves. 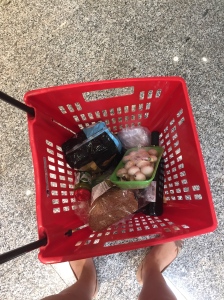 And then we confusingly cooked a feast (which killed the power at one point because apparently utilizing two stovetops and a hairdryer at the same time – Ernesto killing it at shaping his hair before dinner – short circuits. Everything. In. The. Apartment)

And this, just to remind you, only serves three individuals.

And after we ate it all, we busted out the strawberries from the fridge, and Sabina ate nutella by the spoonful. And then retrieved peanut butter that she ate as well.

And what is the only option after you finish feasting? FEAST SOME MORE. So Tabong came over, enjoyed our two bottles of wine, and then we went over to the second home that Together has formed in the last year, and decided to attend their feast as well with some awesome people, mostly because Alex had cooked the most delicious Brazilian dessert while we were eating, and we wanted some more.

We ate more pasta, and this delicious chocolate and coconut dessert. And then being the fun-loving, social introvert who tries to pretend like extroversion is a possibility at times, I started waving my hands around and was like, “everyone, up and out!!! Let’s go partaaaayyyy!”

And my only evidence that we were even mildly inebriated or having fun (because we were absolutely having fun) was Sabina looking like a Dodo in my faux-hipster Warby Parker glasses, and me trying to look like a dumb Yoko Ono and failing miserably.

The morning after, Michael woke us rise and shine at 8 am, having gotten up even earlier to cook me eggs and make us tea and breakfast, which made it impossible not to say, even after only 9 hours of sleep total all weekend, to say no to waking up, and walking another 50 minutes to line up at the Vatican for the museum which was free at the last Sunday of the month. I can tell you, absolutely, that the Vatican Museum is the most beautifully plentiful museum in the entire world (well, from my limited experience in museums, of course), but I won’t tire you with photos that don’t do them justice, and which reminds me of how exhausted I was walking through the whole thing. One of my favorite pieces in the museum was one of the ceilings in some of the dozens of rooms we walked through, and up there in the top corner is a painting of poetry, which I stared at for a while. 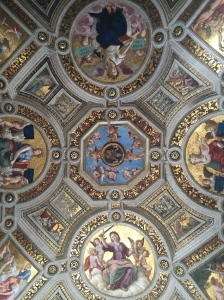 And then I conveniently got kicked out for taking this picture, 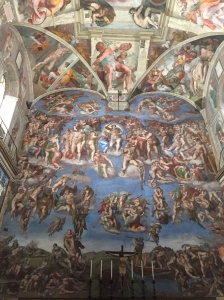 I was a little sad at how many people there were in there, and that people were constantly being told to be silent, and not take photos. And I was a little piece of poop for taking this photo, but I really wanted to be able to appreciate it later on, after the overwhelming fatigue wore off, and then I put away my camera (after I was shooed out), took out my cardigan, and prayed to God I would look liek another Asian tourist they hadn’t seen before. Which worked. And so I sat down at the side bench and stared up at the ceiling and the chronology Sabi had explained to me for a while, thinking about how different the Chapel is from what I thought it would be, not because it was any less beautiful, but because I was there.

And as we left, this is the stairwell we descended.

With three hours to go, we booked it through the Metro, to grab some food at the Coliseum, which we were able to see from outside, and which was gorgeous, of course.

And this salmon pasta was heavenly to my famished tummy. 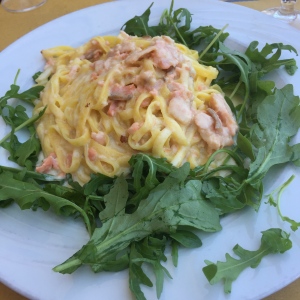 AND THEN. I panicked. Not at the disco. But because I missed the train I was supposed to take, and then took a later train that would get into the airport only 50 minutes before my flight and I was like IF I MISS MY FLIGHT I WILL NEVER GET BACK TO STUDYING AND I AM A NERD AND I MUST BE WITH MY BOOKS. But I still took a cool photo of the train, anyway.

And when I got to the airport, and finally checked in, all I wanted to be like, was like this kid who was like, “screw the airport, I have my personal trolley.” 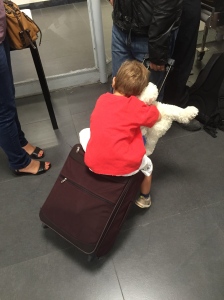 But then we got home, and I remembered why I study in France, and as cool Rome and Italy is, not being able to speak the language there was so frustrating, and I love that I am trying, here, to be able to do something I couldn’t do freshman year in high school, or even college, at all.